Students and Teachers in Court in Portsmouth!

Home » Blog » Students and Teachers in Court in Portsmouth! 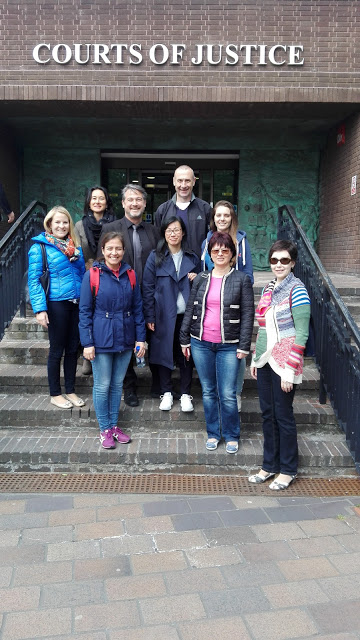 Just recently the 30+ class went to Portsmouth Crown Court as part of the crime theme week. We were inspired by one of our students, Lisa from Germany who is a corporate lawyer. Lisa is at LSI/IH Portsmouth to improve her English before she starts her new job.

We sat in on the sentencing of seven men found guilty of drug dealing. We listened to the prosecution barrister (lawyer) give his summary of the evidence against these men to the Judge. We found out that they had dealt hundreds of thousands of pounds of drugs in Portsmouth. We heard lots of details like the £500 a month leased Audi TT they used to take the drugs from Manchester to Portsmouth. We also heard about the grandmother in Manchester who looked after the drugs in an orange bag.
Neil Powney

“For me, as a lawyer, it was interesting to see a criminal trial at a British court, to see a hearing with completely different habits.” (Lisa from Germany)

“I was a little bit nervous before we went into the court, just in case we saw a murder trial. It was very impressive to see eight barristers all wearing their wigs at the same time.” (Mariko from Japan)

“Learning English in an unusual daily situation is an incredible way to improve a lot of vocabulary. I’m very happy to witness a case in a British court and see the barristers wearing white wigs.” (Lilly from Peru)

“Yesterday we went to the crown court. I was looking forward to going there with the class. I was wondering why we had to pass through a control like at the airport.

So, when we were in the crown court room I checked the situation and got an overall view. Neil told us before that the trial was for drug dealing. There were eight accused, young lads. I felt sorry for them, then I asked myself what life will bring them in the future? Starting life like this is really bad, and getting out of it is hard.” (Manuela from Switzerland)

“Yesterday we went to a real English court and looked at a real meeting of the court. As one of our class said, it was like a theatre – very strong judge, prosecutors in the wigs, no phones, no photos, keep silence, very interesting atmosphere. But what is interesting, I didn’t feel pressure so much, because there it was not crowded, there was fresh air and comfortable seats, like a theatre. What a shame that photos and videos were forbidden.” (Ekaterina from Russia)