British Culture – Queuing – Why do we do it?

Queuing and why we do
it 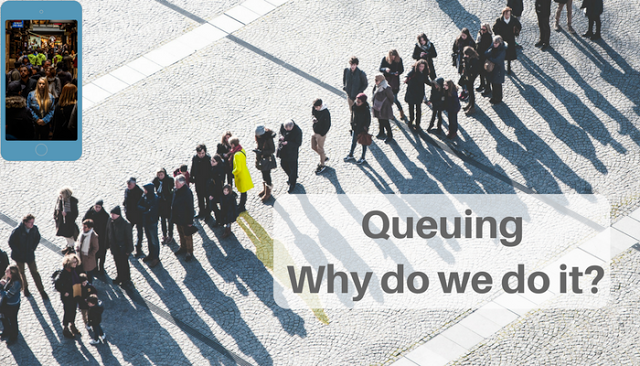 Another in our series of articles about British Culture. This week we look at the art of Queuing – and why and how to do it properly.

If you were to ask people around the world what they think the British love doing, many would immediately think about queuing. The British are certainly experts on queuing and have a particular set of rules about how to do it properly!

So when in the UK this is what you need to do:

1. Never ‘jump’ the queue! (jump – go to the front of the queue) This is considered the biggest no-no of all and will result in everybody muttering loudly, though being British nobody will probably say anything directly to the queue jumper.

2. Try not to stand too close to the person in front of you. The British like a certain amount of personal space.

3. If a large gap opens up in front of the person who is in front of you, do not tell them to move forward. This is not considered to be polite.

4. On the whole people do not really talk much to each other when in a queue, though a casual remark about the weather is acceptable. Do not talk about Brexit!

5. Do not offer your place in a queue to another person. A ‘newcomer’ to the queue is always expected to go to the back (Unless you came together and will leave together – for example at the Supermarket).

6. In a supermarket it’s OK to ask someone to hold your place in the queue as long as a) you ask politely b) you are near the back of the queue and c) you come back quickly. Otherwise the others in the queue will start muttering again!

So are the British, in reality, actually good at queuing? On the whole they are, but then so are lots of other nationalities. It very much depends on where you are. In a bank, a supermarket or when buying tickets at the cinema, theatre etc. the British are pretty good at queuing. However, at bus stops or waiting to get on to a train or the Tube (the London Underground), the system starts to break down. It can collapse completely outside large stores on the first day of the Christmas sales. Seeing people shoving and shouting at each other, an observer might say: ‘This is just not cricket!’ before they themselves try to force their way into the store!