What a fantastic year we have had this year. Happy, sad, funny and interesting. Here is a round up of all the fabulous things we have been involved in this year. 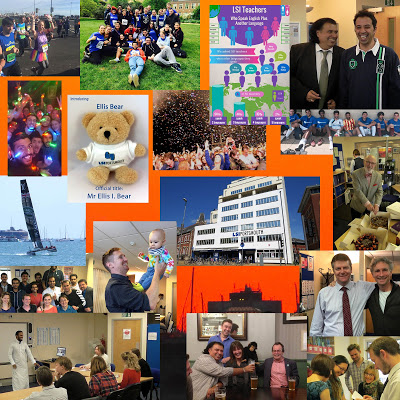 We started off the year discovering how many languages in total our teachers speak, with a great little info graphic. Then came the sad part where we said goodbye to our lovely Bill Phillips, a hugely popular teacher who has been with the school for 20 years. He decided it was time to stop, but he is now a host family. We also had some of our staff start on a management course. Probably one of the most fun things to happen in the school this month was some of our teachers started learning Arabic with Arif.  See stories here

In February, we welcomed back an old friend, a student who attended the school over 25 years ago. And we said a temporary goodbye to Hannah who started her maternity leave to have her and Adam’s baby. We were delighted to hear that Allan Gray’s (who used to be the marketing director here) G Boutique hotel had won yet another award.  See stories here

We launched our first quiz, ‘What type of student are you?’ which proved very popular, and we finally launched our new study centre, with Becky telling us on video what was available. We also had another rooftop interview this time with Belle telling us about the LSI Social Programme. As always, the generous side came out for Comic Relief day and there was a charity cake bake. See stories here

In April we had a celebrity visit us in the executive centre and gave us a lovely interview. Paul Rosenmöller is a well know TV face in Holland, dealing with hot political topics. There was also a great little story about LSI’s involvement with Karaoke.  See stories here

Once again the LSI team were out supporting charity, this time with a fun run in Oxford along with a lot of other language school’s teachers and students. However mostly May was dominated by the General Election. One of our teachers Jeremy made a lovely presentation which explained how are elections are carried out in the UK.  See stories here

In June we finally revealed the long awaited reveal of LSI’s fantastic facelift. For months we lived in a building covered by netting and scaffolding, but it was most definitely worth it to finally see the fantastic new face. Once again we focussed back on the many language skills our teachers have by showing an interview with two of our bilingual teachers.  See stories here

Quite a few events of note happened this month. Firstly our sweet little Ellis I Bear arrived at the school, hoping to go travelling with as many people as he can. Lovely Hannah (teacher and marketing lady) had her baby, and then the incredible Americas Cup race event happened in Portsmouth.See stories here

Yet another charity event happened in August, this time football. A wonderful video interview with Amelia and two lovely Arabic students and another big event in Portsmouth; Victorious Festival.  See stories here

England was agog with Rugby mania but closer to home was a milestone in LSI’s history. This year we reached the grand old age of 30 years! We decided to celebrate it this year with two parties and a video showing the journey from where we started to where we are today.  See stories here

The Halloween theme seemed to dominate most things in October. So to continue with the fun theme we made a quiz for people to find out how well they knew Portsmouth. This proved incredibly popular and was taken a few thousand times. Amelia interviewed two wonderful Chinese students and our Vice Principal and his band headlined a refugee charity gig.  See stories here

Joel rounded up a very successful year for him by being promoted to GE/Exam ADOS. One of our teachers had a surprise (to us) wedding. We had not one but two charity events, one was a bake off in aid of the most wonderful charity in this area – the Rowans Hospice, the other was the Great South Run which not only included teacher Jenni (running for DEBRA), but also two Swiss students, who talked with Jenni in an interview about their experience. Finally, being November, it couldn’t pass without a visit to the traditional fireworks display held every year in Cosham.  See stories here