We are Happy at LSI Portsmouth ;-) The story of our video

Home » Blog » We are Happy at LSI Portsmouth ;-) The story of our video

Here is our video, showing what a great place this is to work and study.  To read more of how this happened see below. 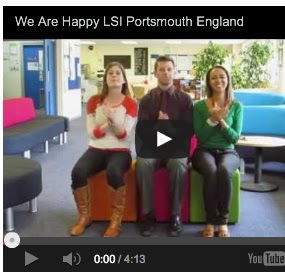 In July 2011, the United Nations General Assembly adopted a groundbreaking resolution which recognised happiness as a “fundamental human goal” and called for “a more inclusive, equitable and balanced approach to economic growth that promotes… happiness and well-being of all peoples”. In April 2012 the first ever UN conference on Happiness took place in New York and in July 2012 the UN General Assembly adopted a further resolution which decreed that the International Day of Happiness was to be observed every year on 20 March. It was celebrated for the first time in 2013.

So we decided to join in and make a video with our school. Circumstances stopped us making it in time for the 20th March, however we believed that it was better to be late and ‘happy’ than never.

Once we decided to go ahead, we found we were suddenly on a roller coaster. We posted an invitation on our Facebook page inviting everyone to get involved and letting them know that we would be filming on the Friday.  The response was tremendous, suddenly there was a real buzz around the school, with students asking how and when and where.  A lot of students were practising moves and teaching their colleagues (and teachers).  And so Friday 4th April arrived.

Of course with an international school such as ours, and so many different cultures involved, we were mindful that it might not be appropriate for everyone.  We set up a barrier in the area of filming and told everyone that in front of the barrier was the filming area and behind was a ‘safe’ zone.  This worked beautifully, and while those in front were really happy to be filmed there were also many others behind who either watched or danced along, but in the knowledge that they would not end up on YouTube ;-).
The logistics meant that of course some teachers and staff were on holiday, however we knew that we needed to get it done in one day otherwise it would be a never ending project and would never be finished.  And so in one day we made our video.

We are just delighted that so many participated and had so much fun.  We are grateful to all the students, teachers and staff who were involved, our Principal who was so enthusiastic for this to go ahead, the UN for such a great idea, but most of all to Pharrell Williams for the opportunity to experience such a happy day.

If you would like to read more of the background to the day, to donate or to get ideas on how to make life happier, see the links below.

If you have 24 hours to spare or are just curious – watch the 24 hour round the world video, showing how the world got involved!

Finally – if you would like to see Pharrell Williams’ reaction to all the many ‘Happy’ videos, then click below to go to Oprah Winfrey’s video clip and interview – it’s a joy to watch. ‘

2 comments on “We are Happy at LSI Portsmouth ;-) The story of our video”