Writing in the style of a magazine article part one – from our students.

Home » Blog » Writing in the style of a magazine article part one – from our students. 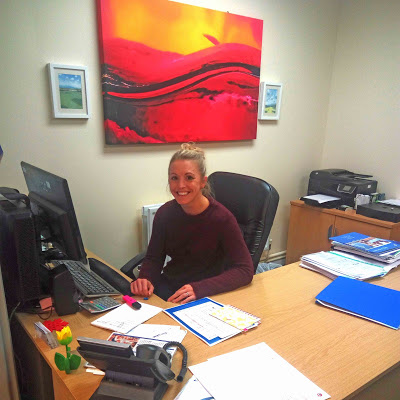 For the last
two and a half years, the lovely Rosie has been the ‘Director of Operations’ for
all the “things that happen in the non teaching part of the school”, she tells
us.

Although she is
clearly a really busy woman, she kindly gave us her time for a short interview.
We meet her in
her office, surrounded by lots of papers and folders. Smiling in a way that
makes us feel relaxed, this elegant and sporty woman welcomes us warmly.
Starting her
career as an events manager, Rosie worked six months for Walt Disney World in Florida, where she
learnt how to organise. Then she moved to Bristol
for five years, working as a registrar where she could implement the theory she
learnt when studying public relations in the North of England.
All the
knowledge she gathered when working in these different jobs has helped her with
the logistical side of LSI/IH Portsmouth.
However, there
is another life besides her job. Asking Rosie what’s important for her, she
answers that sport plays an important part in her life. “You will normally see me
hobbling around”, she says. Actually she likes playing tennis and doing Boot
Camp, which is “really hard but really good”, she mentions. From what she says,
Rosie seems to be a very dynamic woman who needs a valve to release her huge
reserves of energy. Obviously she found this valve in doing Boot Camp where she
gets shouted at while doing her exercise.
The other
important pillar in her life is her family, like a haven where she can find
support coming back from travelling.
On the subject
of travelling, Rosie has seen many countries from different continents such as
North America, South America and Europe. Expecting
her to speak several languages she admits not being able to speak any others well
apart from English. Her biggest regret is having given up learning languages at
sixteen, when she had to decide on her speciality at high school. “My mother
told me to continue studying languages because I was good at it, but, you know,
in this age teens don’t want to listen to their mothers…. I should have done
it.”
Isabel Rolf